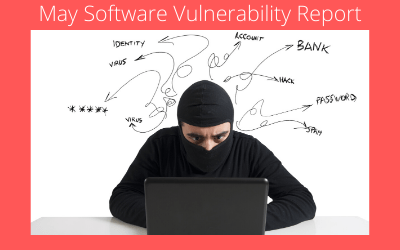 Below is a recap of of WordPress security vulnerabilities and other software exploits from around the Web in May 2019.

If you have any of the plugins or themes installed on your website, or use any of the software mentioned, update them to the most current version as soon as possible.  In some cases their has been no solution provided by the developer and we strongly urge you to remove the theme/plugin/software and find an alternate solution.

Remember that outdated software is the number one reasons websites and devices get hacked.

Breaches From Around the Web

A hacker group named Fxmsp claim to have stolen 30 terabytes of data from American antivirus companies. This is an interesting story because it shows that even antivirus companies are vulnerable to attacks. Not to mention that household names like McAfee and Norton may be the victims.

Facebook-owned WhatsApp had a vulnerability that allowed attackers to install spyware on your phone. If you are a WhatsApp user be sure, you are using the latest version of the app.

Last month, it was disclosed that WebLogic Servers were vulnerable to a Sodinokibi ransomware exploit. Oracle has issued a patch for the vulnerability.  Victims of the attack were greeted with a demand of payment to release decrypt their files.

The City of Baltimore is Hacked

The city of Baltimore was the victim of a malware attack costing the city an estimated 18.2 million dollars. To add insult to injury, they were attacked using EternalBlue. EternalBlue is a tool that was developed by the N.S.A. using United States tax dollars.

Google disclosed that they patched a bug that has been ongoing since 2005. The bug that only affected G Suite business users, would store some passwords in plain text. This means anyone who gained access to the stored passwords would be able to view your password.

If you are using Slack on Windows, be sure you update to version 3.4.0 immediately. Prior to version 3.4.0, hackers could post a malicious link that when clicked that would have allowed them to redirect a user’s downloads to a file server belonging to the attacker.

Thanks to iThemes for compiling this information!